In this focus video, David Diamond offers his perspective on mentors and the inspiration that kept him going in his business. 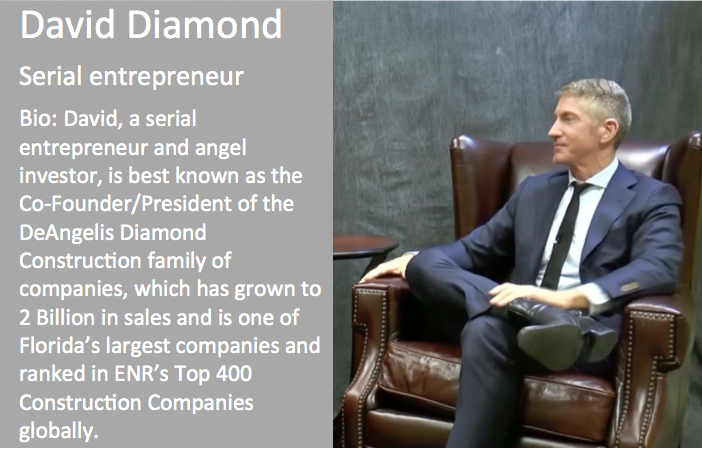 Bio: David, a serial entrepreneur and angel investor, is best known as the Co-Founder/President of the DeAngelis Diamond Construction family of companies, which has grown to 2 Billion in sales and is one of Florida’s largest companies and ranked in ENR’s Top 400 Construction Companies globally.

In addition to DDC, David has launched over 20 successful startups both as a cofounder and early stage angel investor in Silicon Valley, New York, and Florida, focused in internet, software, mobile, and healthcare technology startups. Three of his companies have been acquired by Google, Amazon and Trip Advisor.

David travels domestically and abroad directly involving himself to raising awareness of the magnitude of Human Trafficking, the plight of refugees in Darfur, orphans in Sudan, Kenya, Rio de Janeiro Brazil, and relationship building in the Caucuses regions of southern Russia.

David serves on several boards including The Board of the Naples International Film Festival, The Advisory Council for FGCU’s Lutgert College of Business , The Board of Fusion Pointe, and the Board of Influence for Kingdom Mobilization, The Board of Advisor for Marbles, LLC and enjoys guest-speaking engagements on the topic of entrepreneurship at several universities including Florida Gulf Coast University, Ave Maria University, and the Nalchik Business Institute Russia where he is an Honorary Professor.